My stepmom Billie called me in Boston on Monday night to tell me that my dad had a heart attack. I was in Pizzeria Uno having dinner with my project team, and I couldn't hear very well, but I knew right away from her voice that he did not make it. She was so nice, and really concerned about me. She kept apologizing for having to tell me over the phone. I told her I'd see about getting an earlier flight home, and that I would call her later. I went outside to get some air, and it was raining. I stood there for awhile, not really knowing what to do. I had just had dinner with dad & Billie on Saturday. They were in town using the gift certificate I got them last Christmas for The Elms, a spa/resort in Kansas City. They had a great time. Afterward, we went to Swagat, an Indian restaurant, and I think dad's dinner was a bit spicy because his forehead kept sweating. He seemed perfectly healthy, same as always.

I ended up driving to Cambridge the night I found out about my dad, to stay with my friends Laura & Trevor. They calmed me down and cheered me up, and made sure I got to the airport for my flight home.

The thing that was most upsetting to me was that dad died by himself. Every time I thought of that, I started crying. But Billie pointed out that he was doing something he loved, working in the yard and planting grass. He grew up on a farm, and always enjoyed that sort of thing.

Everyone at work has been really supportive, even people I don't know very well. They offered to send flowers, but I told them I would feel better knowing that their money would go toward prevention and treatment, and I asked them to make a donation to The American Heart Association.

More Boring Posts About Things Only I Care About!

I just got my Treo 300 phone/PDA and it is even better than I expected.

The phone works great, and the PDA is incredibly handy. With this one device, I can talk on the phone, synchronize with my work calendar, surf the web, and send/receive email. (Caution: Never do all of these things at the same time, unless you're driving.)

And the best part is that I got it for $50 after rebates from Amazon. Go buy one for all of your friends!

The ultimate phone/pda is now available!

My friend Lawrence Julie asked me if I had a take on the whole Gov. Shwarzenegger thing. I figured everything had already been said, until I thought back to my misspent youth watching action movies. I seem to recall one called Predator in which Arnold and his fellow commandos are forced to battle an alien in the jungles of South America.

This 1987 film would (and should) be utterly forgotten, except it also starred former-wrestler/future-governor Jesse Ventura in his film debut. So this one action film featured two future gubernatorial leaders!

I suppose it's only matter of time until we elect: 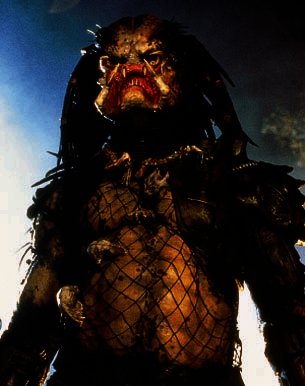 It appears that famed magician Roy Horn is making a recovery from being mauled by a tiger during a recent show with partner Siegried.

The oddest thing about the new Yahoo article is their "how we met" story:

"The two performers met and joined forces in 1959, when Horn smuggled a cheetah on board a cruise ship where Siegfried Fischbacher was performing magic."

It's true. I passed my examination last week, so I am now a certified Project Management Professional (PMP). The process was very rigorous, and accounts for my lack of posts lately. I had to

Take the practice exam and see if you, too, are ready for the glamorous world of project management!